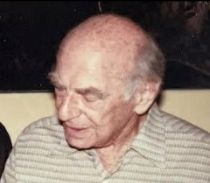 MOSES MYER SUZMAN Physician and Teacher
Wits University gave Mosie Suzman an Honorary Doctorate – he gave Wits University Medical School a lifetime of creative teaching and dedicated clinical practice. Generations of Wits medical students found him inspiring, awesome and warm. His wife, Helen Suzman, one of South Africa’s most famous MPs, would say: ‘Whenever I travelled overseas on political business, some doctor would come up to me and say, “I learned all my medicine from Mosie on Ward 11 of the Johannesburg General Hospital.”’ Avroy Fanaroff and Chris Bosman from our class, felt very privileged to be his interns from January to June 1961. Avroy has sent us this appreciation and there are added notes from Andre van As. They all felt that Mosie was a remarkable teacher and mentor.  Mosie’s early life Moses Meyer Suzman, known to friends and colleagues as ‘Mosie’ was born in 1904 and educated at the prestigious St John's College, Johannesburg.  He started his medical studies at Wits and went abroad to complete his degree at the University of Durham in the UK. After graduation he served as house officer at the Royal Victoria Infirmary, Newcastle upon Tyne. In 1929, he was awarded a Rockefeller fellowship at Harvard University Medical School where he developed an interest in research. In the early 1930s, he returned to South Africa. During the Second World War he signed up and commanded the medical unit of the South African General Hospital in Egypt and was promoted to the rank of lieutenant colonel. Consultant physician and teacher at Wits As part of the post-war medical reorganisation, in 1946, Mosie Suzman was appointed Consultant Physician to the Johannesburg General Hospital and teacher to Witwatersrand University Medical School.  This picture below, shows the old Johannesburg General Hospital in Mosie’s time and ours. Ronnie Auerbach pointed out the that the white semicircles were escape chutes where in case of fire or other emergency, patients could be evacuated by being slid down these wrapped in their mattresses! This imposing edifice on Hospital Hill, still stands today, though medical services ceased there in 1973, and is reported to be being renovated as a health centre of some sort. 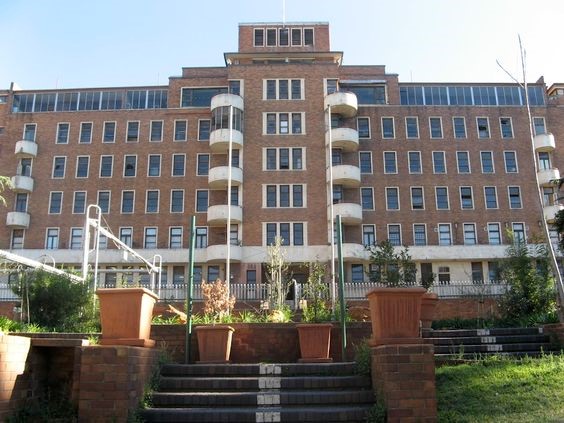 Destroyer of pet medical theories What set Mosie Suzman apart, was his refusal to accept conventional wisdom. Voracious reading and an encyclopaedic memory combined to make him a formidable destroyer of pet medical theories. At our weekly conferences attended by many specialists, he would delight in taking a contrary view. Needless to say, he would often be proved correct. Avroy says, ‘Dr Suzman gave us access to his own personal library, which was superior to the medical school one. If he quoted something, he would mention the year and month of the journal in which it appeared. He would never be out by more than a month’.  Andre van As recalls: ‘We knew that he had his journals airmailed while other mere mortals received theirs by sea two weeks later. So, he always had the advantage of the latest published information. He also had vast experience on a wide variety of topics in medicine. We were almost “afraid” of his encyclopedic knowledge, specially at the Friday morning presentations.’ In this slightly grainy picture (below) Avroy is in the back row second from the left, next to Ben Goldberg on the extreme left. Felix Schneier is fourth from the left followed by Yarmy Gentin. Chris Bosman is second from the right. In the front row second from left is Sister Edgar and fourth from the left in the middle is Dr Mosie Suzman. The other sister in the front row is Sister Downing who ran his other ward. Avroy can’t recall the names of the other doctors and sisters.

Avroy remembers: ‘He was very gentle with me when I presented the electrocardiographs (ECGs) of three patients who had all died. I had admitted them the previous night with massive myocardial infarctions (MI). He said, that based on their presentation in shock, and their ECGs they had no chance of surviving. He was not gentle however, when I had to consult a chart during a conference because the patient had so many admissions, and I could not remember all the details. That only happened once. He expected you to know everything on all your twenty plus patients.’ Mosie was a pioneer, decades ahead of his time in the use of anticoagulants such as Warfarin for MI patients, Avroy and Andre both attest to the difficulties of his junior staff in running the weekly clinic where they had to adjust the dose of anticoagulants for the cardiac patients. It was a massive undertaking as there were often 200 to 300 patients attending the clinic. They were dealing with a very inexact science in those days, with the risk of starting major bleeds or causing clotting again. Andre notes that it is interesting that anticoagulation is currently back in vogue for the long-term management of MI.
Andre continues: ‘One Friday I presented a new non-invasive way of measuring anaerobic threshold in athletes by detecting the production of excess expired carbon di-oxide. Mosie then commented that in 1939 he and his fellow athletes (he was apparently a good track athlete) were measuring the production of lactate in venous blood while they trained on the Wits athletic field and used these blood levels to guide their training. He was a truly remarkable man.’ They remember that Mosie was never driven by the clock. He would spend as much time with his patients and interns as necessary to solve all the problems, before leaving for his consulting rooms. It was clear that he enjoyed his work both in medicine and in teaching. They are forever grateful that they had such an inspiring, gentle, warm and caring mentor and teacher to help launch their medical careers. The Doctor’s Doctor Mosie Suzman was known as the doctor's doctor – a consultant to many of his colleagues. He was a physician of international repute, whose fine and restless mind constantly challenged medical orthodoxies. He has been attributed with diagnosing Tuberculosis (TB) in Eleanor Roosevelt when she was critically Ill. Unfortunately, the TB was resistant to therapy.   His patients loved him for his compassion and meticulous attention to detail. Not for him the glib diagnosis or the quick fix. He took infinite trouble to reach his own conclusions.  His main interests were in nutritional defects, vitamins and cardiology. He developed the use of beta blockers as a means of treating anxiety and hyperventilation long before the medication became generally accepted. Similarly, was his use of anti-coagulants – as we have seen above. He was an active member of many international medical societies. Even after his official retirement he continued his association with the medical school and other institutions and was active in teaching, meetings and clinical work. Family 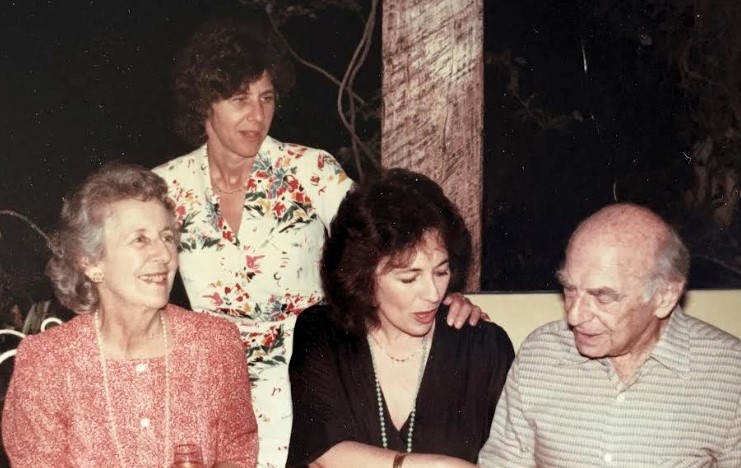 Helen, Patricia, Frances and Mosie. (Allan Gottlieb from our class, does not recall much about his medical firms, but does remember that he took out both of Mosie’s daughters.) Mosie’s wife, Helen, was South Africa’s most renowned member of Parliament during the Apartheid years. She was world renowned as an indefatigable fighter for civil rights and a staunch opponent of apartheid. Mosie shared her passion for a just society and her work was recognised by many honours from many countries. She won the United Nations Human Rights award in 1978 and the Queen made her an honorary Dame in 1989. They had two daughters, Mrs. Frances Jowell who lives in London and Dr Patricia Suzman, a Wits medical school graduate and Nephrologist in Boston, and two grandchildren. Mosie died in July 1994, a few months after celebrating his 90th birthday. Happily, he lived to witness both the release of Nelson Mandela from prison and the first multiracial election in South Africa. Other tributes: Ben Goldberg Ben Goldberg who worked closely with him (and who is in the picture above of his firm in 1961- and who wrote an obituary) says: ‘Mosie had many interests outside his profession. He loved books, music, Persian carpets, food, wine and good conversation. He was a keen golfer - but his theory was better than his practice. Yet he was always ready to give a lesson on the perfect swing, both on and off the golf course. As he grew older, he spoke of three ways to handle age: never retire from work, never become old, do not become sick. Good advice but, perhaps like his golf, theory is one thing, practice another’.   David Kanarek ‘my Guru’ David Kanarek who served as Mosie’s fellow for 2 years wrote:
‘When I applied for a pulmonary fellowship at Massachusetts General Hospital MGH), I received a simple reply: ‘Dr.Suzman has recommended you and I am happy to welcome you. I do not need any other recommendations.’ After three weeks at MGH an attendant stopped me in the corridor and said, ‘Do you know Dr. Suzman?’ I replied, ‘He is my Guru.’ He responded ‘When I was chief resident in Medicine under Professor Walter Bauer, he called me in and said “There is a visitor coming (Mosie Suzman). I want you to find the five most difficult patients in the hospital, patients we have no clue about what is going on. Show them to him and if he does not know the answer, no one does!”  I am deeply grateful to him for the career I have had.’
Profile and tribute to Moses Myer Suzman (1904 – 1994) MB BS Durh (1926) MRCS LRCP (1926) MD (1928) MRCP (1929) FRCP (1957) FACP FACC contributed by Avroy Fanaroff with acknowledgment to obituaries in the British Medical Journal by Ben Goldberg and The Independent, 19 July 1994 by Rex Gibson Additional comments by Andre van As
Edited by Geraldine Auerbach MBE, London September 2020